Now is the perfect time to celebrate the Irish culture and history. Make sure to read this post to prepare for one of the most anticipated celebrations of the year!

Whether you are already living in Ireland or planning on coming here soon – perhaps on an exchange to improve your English, here at Atlas Language School? – you must have heard about St Patrick’s Day! Not only because it is the most widely celebrated national festival in the whole world, reaching more than 50 countries. You must have also seen the outstanding images of green landmarks and excessive parades taking place on the day.

But who was St Patrick and why do we celebrate him? What is the reason behind all these shamrocks and why do some rivers turn green on March 17th?!

This and more questions will be answered soon, just keep reading 😀 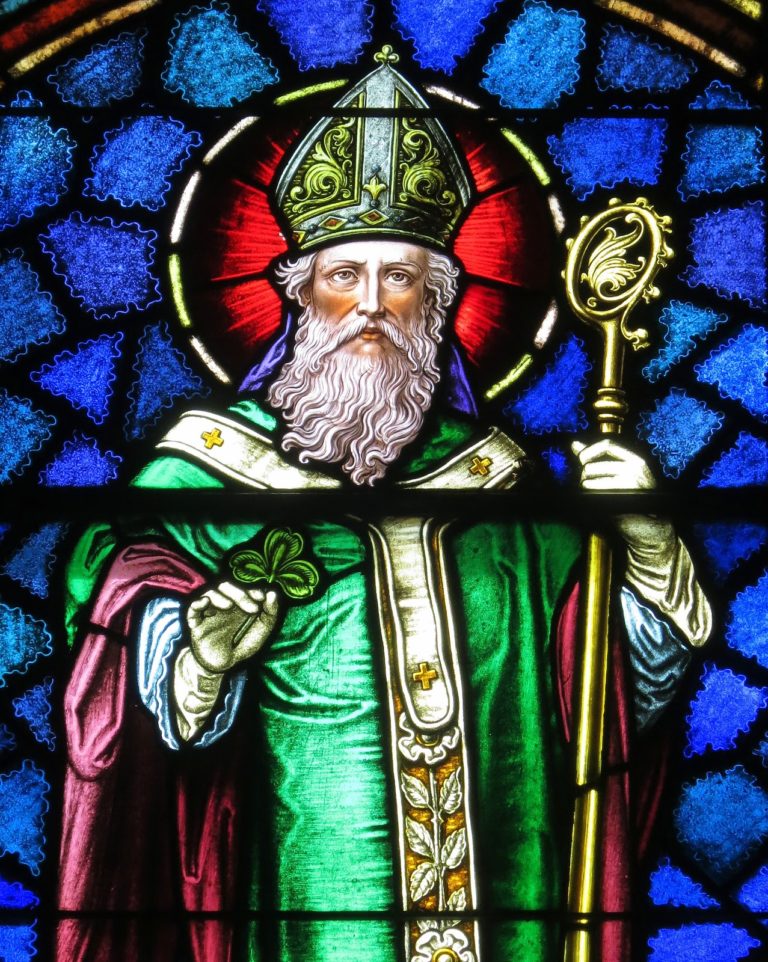 A representation of Saint Patrick, or Pádraig in Irish

The “Apostle of Ireland”

Worldwide, March 17th has been chosen as the day to celebrate St Patrick, a catholic priest and missionary of the late Roman times, also known as the “Apostle of Ireland”. Originally from Britain, he became famous for converting the people of Ireland to Catholicism. At the time the island was, in fact, inhabited by the Celts and therefore still pagan.

Most of what we know about his life comes from a collection of manuscripts which was written by Patrick himself. In the books, he tells many stories of how the Irish pagans were converted to Catholicism. One of these stories, in particular, may explain why you can find shamrocks everywhere during this celebration!

The legend of the shamrock

Apparently, St.Patrick used the shamrock to explain Catholicism and the Holy Trinity: the three leaves represent the Holy Ghost, the Son and the Father. At the same time, triple deities and symbols were also commonly used in the pagan faith. The priest had found a way to connect the two religions, thus facilitating the conversion! A very famous Gaelic symbol with three sides is the triskele, which could also be found in other cultures at the time, and it does look a little bit like a shamrock!

The shamrock became a way to honour Patrick’s mission and remember him on this day. Ever since it has been worn worldwide on March 17th by people of Irish descent to honour their Irishness.And sometimes it is also eaten! This comes as part of a tradition known as “drowning” or “wetting” the shamrock. The leaf is put at the bottom of a pint of beer, cider or a glass of whiskey. People then usually propose a toast to St. Patrick, to Ireland or to those present. Lastly, the shamrock would either be swallowed or tossed over for good luck.

St Patrick’s Day is often celebrated organising festivals and parades that promote everything Irish: enjoying local products such as Irish beers, ciders and whiskeys is part of the fun, as well as wearing green and taking part in ceilithe, which are social gatherings with traditional Irish music (which is also known as trad).

The colour green is also present in Irish legends and mythology to signify the island and its people. It has then emerged as a representation of the Irish culture, together with the shamrock and the Irish language, during the Gaelic revival of the last century. This is why it is custom everywhere in the world to wear green and shamrock adorned things on St. Patrick’s day, and why the week of March 17th is also known as Irish Language Week, here in Ireland!

But it is not only people that choose to wear green on this day. Oftentimes lights, buildings, even rivers turn green in different cities around the globe, to honour the Irish community and culture. In fact, due to the Irish history of emigration, there are people of Irish descent in many countries outside Ireland, a grand total of 75 million people! You can find more than 300 landmarks around the world that are “Going Green for St Patrick’s Day”, located in 50 different countries! Some examples are Brazil, Argentina, Canada, China, Italy, Australia, Lithuania, Malta, the UK and the US (where, up until the last century, the celebrations for St. Paddy’s were even bigger than the ones in Ireland) .Our beloved Atlas also turns green!! Here’s a pic of our lovely building tinted green for St Patrick.

One last fun fact: St Patrick’s Day is also celebrated in space! On the International Space Station, some astronauts are seen wearing green and singing or playing Irish traditional songs on March 17th. In the following video you will see NASA Astronaut Cady Coleman showcasing her skills with the flute and the tin whistle, instruments often featured in Irish trad music.