So you think you know everything about beer and pretzels…but what if we asked you about your dirndl or your masskrug? Nothing? Well, you might want to revise that A.S.A.P, because here at Atlas we will be hosting our own Oktoberfest, and you don’t want to come unprepared.

Oktoberfest is known to be the largest folk festival in the world, and the people of Munich, in the German state of Bavaria, are really proud of it! Its origin dates back to the nineteenth century, but it is still going strong to this date, with many other cities celebrating at the same time as Munich (and you will find Dublin to be one of them). Check out this post to know more about the history, traditions, and what to look forward to for this year’s Oktoberfest.

It all began on October 1810, when King Ludwig I of Bavaria married Princess Therese of Saxe-Hildburghausen and decided to invite every citizen of Munich to join them in the celebrations. The people rejoiced and went on to organize parades and events for the following days. After that, the festival was organized almost every year for more than two centuries, and the people of Munich are keen on keeping the tradition alive. Today, Munich’s Oktoberfest features many attractions, like the music tents with entire orchestras playing live traditional music or the breathtaking rides and rollercoasters that you can see in the picture above.

Parades: Oktoberfest in Munich is an occasion to parade the cities’ local folklore and its specialities, such as brass music and beers. You will find parades taking place regularly, with the main ones being lead by the Munchen Kindl – someone portraying the monk that founded the city – as well as notable people of the city council and of the state of Bavaria. In the parades, you will also find people from local breweries and restaurants, musical and marching bands, flag wavers, traditional costumes and rifle clubs and about 40 carriages with decorated horses and carts! Garments: The people of Munich, as well as those that join them for celebrations from other parts of the world, will often be seen wearing typical clothing, such as the one in this picture. The ladies will be wearing their dirndl, while the gents will most likely wear a trachtngwand.

Food and beverages: It’s no news that beer is a significant part of the festival, but it is very interesting to notice in what ways. For example, only beers that are brewed in Munich can be served at the city’s Oktoberfest, and you will often see them poured in the pint glass known as masskrug. Moreover, the festival does not start until the lord mayor of the city opens the first barrel of beer at 12 o’clock on the first day and says “O’zapft is!” or “It’s tapped!”.  As far as food goes, the Germans sure know how to compliment a nice beer, and that is often done with roasted meat, hot dogs, pretzels, sausages, potato dumplings or cheese noodles. 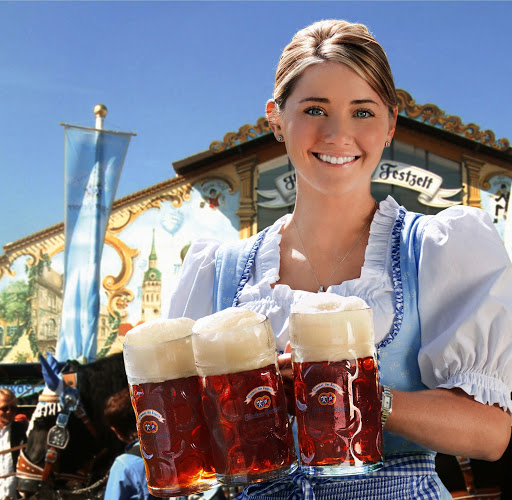 What to do to celebrate Oktoberfest in Dublin

The best place to celebrate this year is probably our school in Portobello, where you will have a taste of the Bavarian traditions and history thanks to our lovely staff. Make sure to bring an empty belly! Want to know what else will be happening this month? Check our calendar here: https://atlaslanguageschool.com/social-programme/

Halloween is just around the corner, you should definitely take a look at this useful guide right here:Halloween – What’s it all About? Get the Frightening Facts